UCalgary Across Alberta: Teryn Girard, a.k.a. the Chicken Master, can’t really explain her love of chickens

Teryn Girard with a canine friend in the third year of her studies at UCVM. Photo by Riley Brandt, U

The Barred Plymouth Rock is Teryn Girard’s favourite kind of chicken. It’s easy to see what draws Girard to the iconic Massachusetts bird, with its black and white "barred" feathers and bright red comb. But she finds it tougher to put into words why she’s so drawn to a career in poultry.

“I can’t really explain it,” says Girard, who is graduating from the University of Calgary's Faculty of Veterinary Medicine (UCVM) on June 3. “I did a master's of poultry behaviour and welfare before vet school. I came to UCVM with an open mind of being a mixed animal or small animal veterinarian, but chickens kept coming back.

“I also just really like chickens,” she adds. “They're smart and they’re fun. I walk into a chicken barn and I smile right away. And it's not C-sections in the middle of the night in minus 30 weather.”

Girard is confidant now that chickens are her future. But during fourth year rotations in the Distributed Veterinary Learning Community (DVLC), she wasn’t so sure.  In fact, at one point, she realized she was also interested in swine medicine. 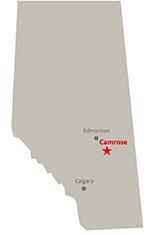 “I was so nervous about that conference, going by myself, and when I walked in Kelsey and Jess found me. They took me under their wing. Introduced me to everybody, and made sure I was making the contacts I needed if I wanted to get involved with pigs. Then they put me in touch with Frank Marshall. When I met Frank, who does pigs and chickens, I thought this is perfect.”

In January, Girard did a practicum rotation with Dr. Frank Marshall at Marshall Swine and Poultry Health Services in Camrose. “It was the perfect working interview,” she says. “We hit it off. That’s what I love about the DVLC. You get to see how you will fit and get an idea of what your job is going to look like.”

At the end of the two weeks, Marshall offered Girard a position. “I liked Frank right away. He seemed like a great mentor who was happy to take the time to teach me about both chickens and pigs. We make a great team and I want to see how much we can expand together. I want to be a big name in the poultry industry.”

Teryn Girard, UCVM Class of 2019, says chickens are smart and fun and they make her smile.

‘They called me the Chicken Master’

Although Girard is just starting her career, during her fourth-year rotations she built up a reputation as a "chicken person."

“People at clinics thought it was strange at first. But by the end of the rotations, they'd say ‘We're going to call you if we have chicken questions.' That was good for me, networking with the vet community."

After a month on rotation at the Edson Veterinary Clinic, staff presented a cake to Girard with a picture of her favourite chicken. “They all called me the Chicken Master,” she says with a laugh.

More seriously, Girard is proud of where poultry welfare is in Canada. She wants to be involved in research aimed at continued health and welfare improvements. “I want to be a voice for the chicken. To be a part of caring for them, and working with Alberta producers to make sure they’re getting the most out of their chickens, while chickens are living in a welfare-friendly world.”

Not leaving the UCVM community

A year of travelling to different practices across Alberta can be tough on fourth-year students. But with more and more UCVM alumni now working at these practices, Girard found a new community of support.

“At Animal Medical Centre South in Medicine Hat there were three grads from UCVM. They knew exactly what I was going through, and they knew where I was learning-wise,” she says. “The UCVM community is why I have got my dream job. The clinics in the DVLC and my rotation with Frank, and then with Kelsey and Jess. Dr. Claire Windeyer also helped me get to where I am today. It seems to have been a big team effort that I’m so thankful for.”

Girard plans to stay in touch with many in the Class of 2019, but she’s also looking forward to building new bonds.

Staff at the Edson Veterinary Clinic presented "the Chicken Master" with a special cake.