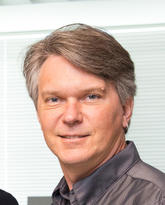 Our lab has two principal emphases: the emergence of higher level groups, and the study of details of life history of vertebrates.

We are investigating the question of the origin of modern amphibians (frogs and toads, salamanders and newts, and the limbless caecilians or 'rubber eels') from a number of different directions. We are studying recumbirostran lepospondyls (gymnarthrid, pantylid, ostodolepid, brachystelechid, and goniorhinchid microsaurs), considered by some to be a sister group to the caecilians. We are also spending considerable effort to better understand the anatomy and evolution of the dissorophoid temnospondyls, and this effort contributed to a rapidly growing body of knowledge being assembled by labs around the world. One current focus of research in this overall program is on the morphology of the braincase and inner ear of modern and fossil amphibians.

This being Alberta, we have some interest in dinosaurs too. Extending from my undergraduate days I retain an interest in ceratopsians, and we will be conducting field work in Southern Alberta in a quest for ceratopsian material to learn more about the life history of these interesting animals. We are also exploring how so many large, herbivorous animals (ceratopsians, ankylosayrs, hadrosaurs) could survive in one place at one time (Dinosaur Park Formation), focusing currently on possible mechanisms for niche partitioning.

Another project takes us to the majestic peaks of Northern British Columbia, where we are hunting in some fairly rich deposits from the Early Triassic for clues into the origin and early evolution of ichthyosaurs. Being highly specialized for swimming, basal ichthyosaur relationships are very obscure, which just adds to the challenge.

Finally, we are looking at the question of early amniote evolution. Many of the molecular clocks used to date evolutionary splits are calibrated with the early fossil record of amniotes. A better understanding of the exact nature of these first divergences will help more precisely place dates to events, and improve molecular clock resolution.