Class of 2019: Law grads foster diversity and inclusion in their profession and the community

Going to law school brings you into a unique community. More than 120 other students with similar goals, striving to make a difference in the world, surround you.

When Hannah Hunter-Loubert and Jay Moch joined UCalgary Law in 2016, they noticed a second key community was missing.

“There weren’t a lot of opportunities to talk about queer issues in law, and not a lot of openly positive spaces,” says Hunter-Loubert. “It was very different from the Social Work environment, where I completed my undergrad.”

And while the law school had recently launched a club focused on diversity and inclusion, Moch knew it was important to create a specific group for LGBTQ+ students and their allies.

UCalgary Law launched OUTLaw in 2017, the last common law school in Canada to establish a chapter, which creates a safe place to talk about being queer. Hunter-Loubert and Moch were two of the club’s founding executives.

“A big way to build community is to have visibility. Even in business school, I didn’t see a lot of visibility of the LGBTQ+ groups,” says Moch. “And if you don’t see visibility while you’re in law school, it’s nerve-racking to think there won’t be any representation in legal practice.”

While there is a focus on addressing issues between the LGBTQ+ community and the legal profession, creating visibility is also about being comfortable in coming out around new people. As Moch points out, “You don’t just come out once and you’re done. You come out any time you enter into any sort of new relationship, be it with classmates, professors, or future employers.”

Both Moch and Hunter-Loubert have seen the positive impacts OUTLaw has made. They have received support from lawyers, and they notice that faculty and staff members are willing to learn about the issues, and to recognize their shortcomings.

“Being part of OUTLaw was really helpful when I was applying for jobs at law firms. It made it OK for me to tell potential future employers that I am queer,” says Hunter-Loubert.

“It also helps weed out the firms you know won’t be supportive, which is really important because you don’t want to work in a place where you can’t be yourself,” adds Moch.

Hunter-Loubert and Moch are both graduating this spring, but they have simple goals for the future of OUTLaw. “We want OUTLaw to keep being a presence in the law school. We encourage students to get involved as club executives. It’s so important, but it’s also pretty fun,” says Hunter-Loubert. 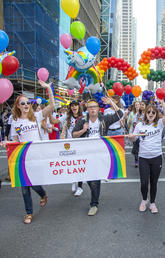