First-year students take home the win in the annual debate.

On November 7, the Faculty of Law hosted the finals of the annual Blackstone Medals Debate. The final round saw four first-year students go head-to-head on the question "Be it resolved that judges be elected." Samantha Wood and Mitchell Folk argued in the negative, and Candace Rissley and Connor Sprague argued in the affirmative.

Samantha and Mitchell won the final round, and Mitchell was top oralist and was awarded the Most Outstanding Speaker Cup donated by Richard N. Billington and Geoffrey D. Baker.

Special thanks to Richard and Susan Billington and Judith Hannebury for acting as judges in the final round. And congrats to all the students who participated in the competition this year! 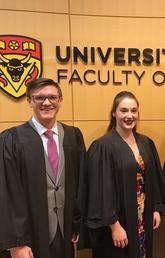